Amidst a misinformed and furious debate in South Australia about electricity prices, analysis by Solar Citizens in their State of Solar report reveals that SA is currently the best place in Australia for households to install solar and save money.

“South Australia has the highest percentage of solar rooftop owners in the country, 197,549 homes or 28.8% of all homes in the State, amongst the highest rates of solar penetration in the world, and the simple fact is that each of these households is saving hundreds if not thousands of dollars each year by powering their homes with solar,” said Claire O’Rourke, National Director, Solar Citizens.

“In the 2014-15 financial year the savings made by solar owners on average in South Australia was $1,295.37 per household – more than any other State in the nation,” Ms O’Rourke said.

“A simple and indisputable fact - homeowners are currently better off financially by adopting solar power for their homes in SA.

The State of Solar report, recently released by Solar Citizens, was the first of its kind to undertake a detailed evaluation of the benefits of Australia’s solar rooftop boom quantifying out-of-pocket investment, the jobs created, savings made on power bills and environmental benefits.

“There are problems ahead though, even for South Australia. At the end of September 62,000 SA will lose their 16c premium feed in tariff and see bill hikes of $380 on average. The minimum retailer price for solar is 6.8c. Retailers then on sell this to neighbours for at least 4 times this amount.

“Again it is clear that right now solar is part of the solution to electricity prices in South Australia not a part of the problem, we can see very clearly that this is why we need more solar and renewables not less,” she said.

“The national figures are incredible, $7bn of out-of-pocket investment in rooftop solar pv, $4.4bn in bill savings and in terms of environmental benefits, 6 million tonnes of CO2 expected to be averted in 2016 alone,” she said.

Figures recently released by Bloomberg’s New Energy Finance indicate a staggering forecast of future investment in renewables globally. Through to 2040, BNEF forecast a record $7.8 trillion to be invested in renewables, including $3.4 trillion for solar, $3.1 trillion for wind, and $911 billion for hydro power. 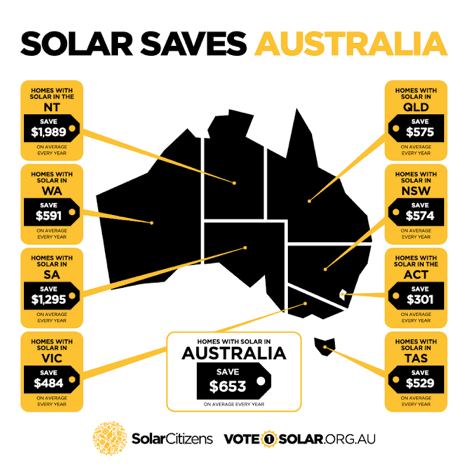 Australians want to take the power back as bills spiral