Rising petrol pieces are increasing our cost of living. But if we can harness our abundant Aussie sun to run our cars on sunshine, our bank accounts will thank us.

Find out how much cheaper it is to run cars on sunshine through home solar, or through the electricity grid, than it is to run an equivalent petrol car. Calculate your savings below!

2. What’s the last price you paid for petrol?


3. On average, how many kilometres do you travel each year by car?

4. Which Electric Vehicle model would you like to use as a comparison?

To look a bit deeper at all the EVs you can pick from, expand the 'Electric Vehicles to choose from' section below.

Your costs and savings:

Cost over 1 year of driving

of the cost of a Petrol Vehicle.

of the cost of a Petrol Vehicle!

of the cost of a Petrol Vehicle! 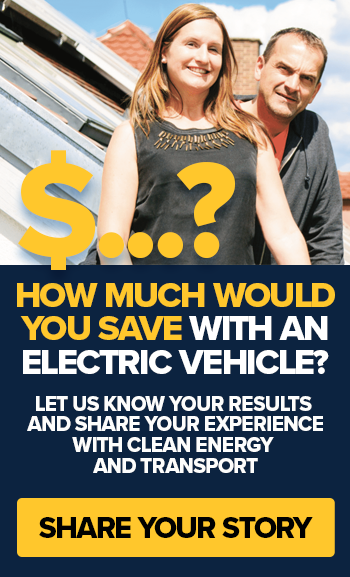 The average cost a consumer can expect to pay for a unit of energy, measured in cents or dollars per kilowatt hour. This cost will vary depending on your retailer and the state you live in.

EV + Solar Cost is calculated by the solar feed-in tariff you would be losing by charging your electric vehicle from your solar panels, rather than exporting the same energy to the grid. While for many people it is impractical to charge only during daytime hours when solar feed in tariffs are at their lowest (because there's a lot of excess solar in the grid), this is when a consumer would be able to charge for the cheapest, should they wish.

Kilowatt hours (kWh) refers to the amount of energy an electric vehicle battery can store. This is different to kilowatts (kW), which is the speed you can charge a battery at. The efficiency of an electric vehicle is commonly measured by how much energy (in kWh) it will use over 100 kilometres of distance.

It's important to note that, like Fuel Economy, this number will differ under hotter or colder weather, and on different road types (hills, city, highways).

The fuel economy relates distance travelled by a vehicle and the amount of fuel consumed, and is measured in the volume of fuel (in Litres) required to travel a distance. A lower fuel economy means the car is more efficient, so hybrid vehicles will typically be lower than standard petrol vehicles.

Other Costs associated with Electric Vehicles

This calculator only considers the fuel costs. While the upfront cost of an EV is typically higher than petrol vehicles, the maintenance costs and fuel costs are significantly lower, because the engines have less moving parts. Anecdotally, maintenance costs can be as low as $80 per year.