**UPDATE: After nearly 2,500 Solar Citizens wrote submissions to the AEMC, and more than 10,000 signed our petition, the AEMC dropped its proposal to allow solar owners to be charged for feeding their clean energy to the grid. This is the second time we have stopped these charges – and Solar Citizens across Australia are ready to take action if the charges are floated again. **

You can read more about the proposed rule changes in this Renew Economy article. 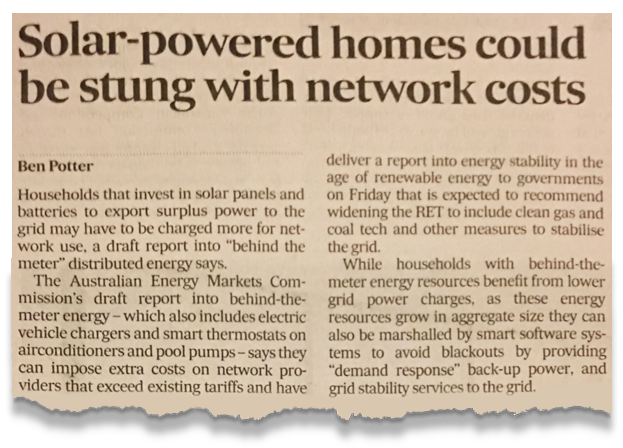 This is simply more outrageous price gouging pandering to the big power companies. And, as usual, it’s the little guys who’ll suffer. The simple fact is the big power stations don’t have to pay to export the energy they generate to the grid and solar households shouldn’t have to pay either.

When the AEMC tried to introduce a similar charge back in 2013 we stopped them. More than 28,000 solar owners joined together to say enough is enough! The strength of our backlash meant solar owners were able to secure meetings to lobby State Energy Ministers and the charge never eventuated.

Now, we must build a groundswell of opposition, bigger and louder than before. Sign the petition today and share it with everyone you know.

The Australian Energy Market Commission are proposing to charge solar owners to export their clean energy to the electricity grid. This is a solar swindle.

Over 1.7 million Australian households and small businesses have put solar on their rooftops to take control of their energy use, cut their power bills and to produce clean energy for our electricity supply.

This move would punish Australian families who have done the right thing. No other power station has to pay to export their power to the grid and solar owners shouldn’t have to either.

I call on you to rule out this outrageous solar swindle.

The Greening of Patsy is following @solarcitizens

Helen signed the petition: "We need cheap renewables for all to solve the energy crisis"

Llewellyn signed the petition: "FES up, we need affordable EVs!"

John signed the petition: "FES up, we need affordable EVs!"