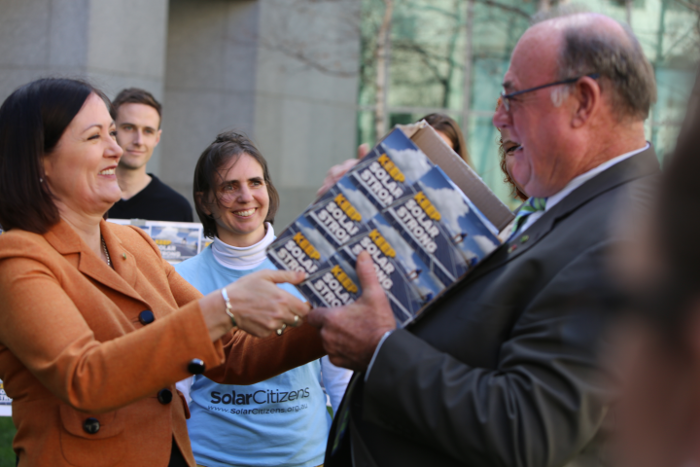 CAMPAIGN UPDATE: In June 2015 the Coalition Government wedged the Labor Opposition into a forced compromise to slash our Renewable Energy Target from 41,000 gigawatt hours to 33,000, you can read more in our media release here.

The Abbott Government wanted the Target axed entirely. But by joining together and running a strong campaign, Solar Citizens across the country managed to save the Small Scale Renewable Energy Scheme and to defend the bulk of the Renewable Energy Target.

More than 28,000 Australians signed this petition, and in August 2014 we delivered it in Canberra to Coalition MPs Sarah Henderson and Warren Entsch, showing the government that people across the nation want the Renewable Energy Target protected.

It's not over yet, and our campaign is going stronger than ever. Solar Citizens are on the front foot with our Stand Up For Solar campaign. We've already gained a policy commitment from the Federal Labor Opposition to a goal of sourcing at least 50% of Australia's electricity from renewable energy by 2030. The next step is to lock in the Abbott Government.

Do you love renewable energy and want to see it grow? Want to get active to protect and grow Solar and Renewables in Australia? Take the pledge to Stand Up For Solar today.

Need more information on solar and the Renewable Energy Target? Take a look at our FAQ here.

Dear Prime Minister Abbott and members of the Australian government,

The Renewable Energy Target has already helped 3.5 million Australians install solar, take back control of their power bills and do their bit for the environment. Millions more want to do the same.

We are concerned that members of the panel established to review the Target are compromised by their strong links to the fossil fuel industry.

Noel signed up to receive updates

Noel signed up to receive updates