Posted by Andrew Campbell on September 05, 2014 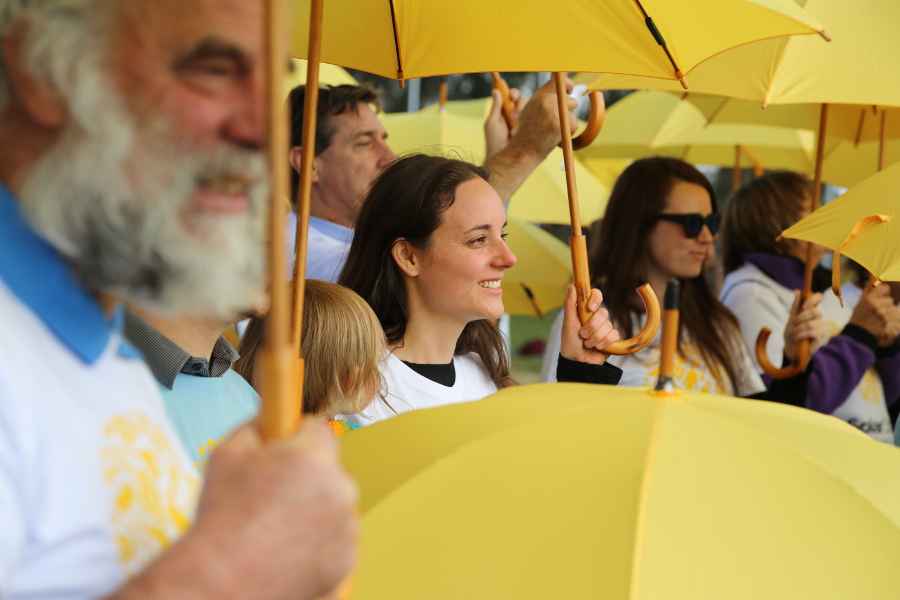 Canberra may have an image as a laid-back city but a day spent at Parliament House is anything but relaxed, particularly when you’re there to tell the government to protect the Renewable Energy Target and Australia’s solar future.

For months Solar Citizens volunteers from around the country had been collecting petition signatures online and on Keep Solar Strong postcards. Every week hundreds of signed postcards flooded the Solar Citizens office until, by the time the first sitting week of Parliament after the winter break rolled around, more than 25,000 Australians had signed the petition.

With some Solar Citizens staff and volunteers leaving rainy Sydney at 5:30am it was an early start on the lawns of Parliament House for the celebration of all our hard work. As Canberra volunteers arrived the sun emerged from behind the clouds to light up the bright yellow umbrellas and solar panels made from signed Keep Solar Strong postcards from around the country - a visual display of more than 25,000 Australians’ support for solar. 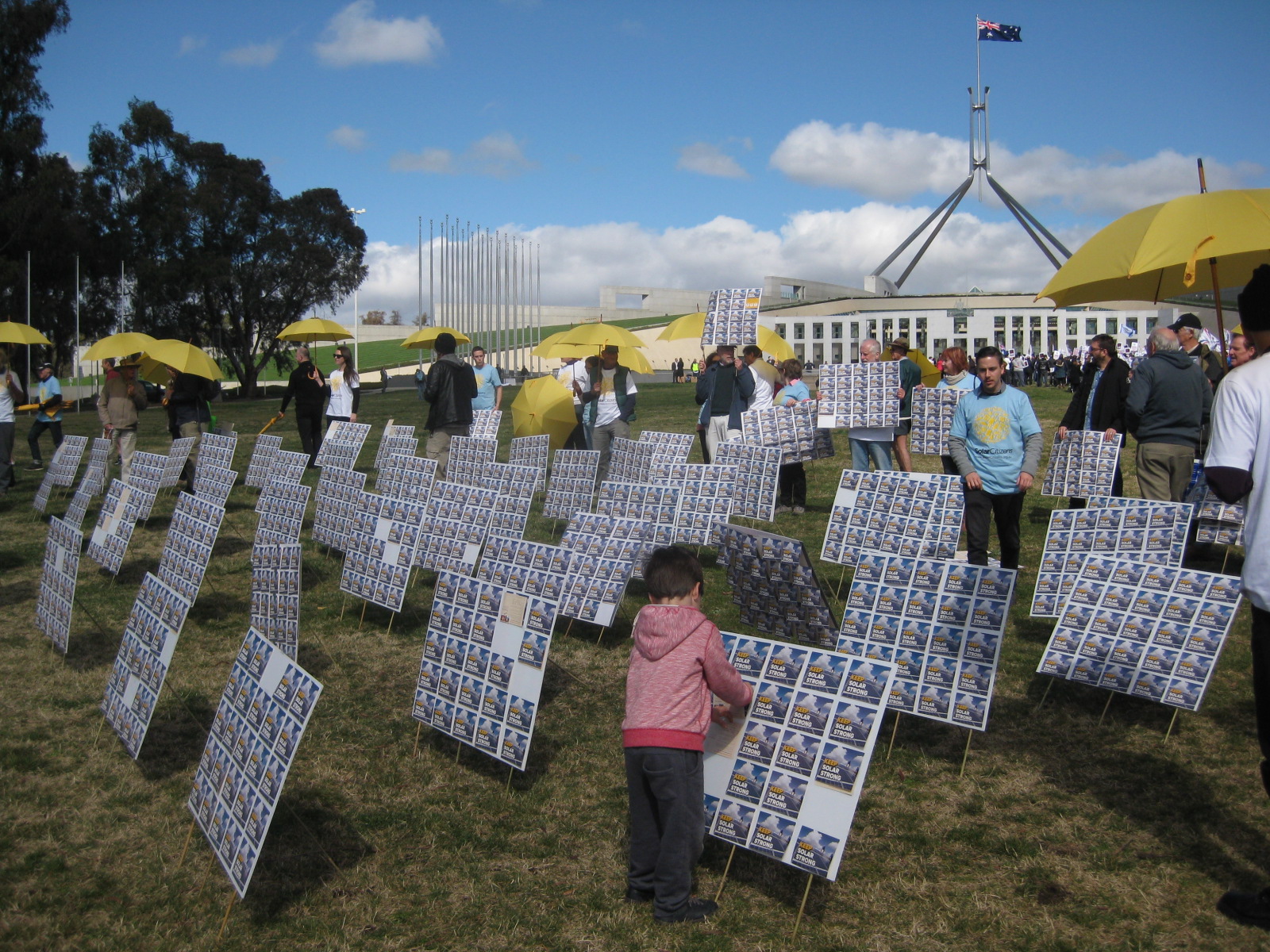 The photography drone buzzed overhead taking photos and footage when we were joined by some very exciting and surprising guests. Greens leader Christine Milne popped down to speak to us about the importance of Renewable Energy Target to keeping energy prices low for all Australians followed by Shadow Environment Minister Mark Butler who stressed the importance of what we were doing to protect solar and the Target.

Then, quite unexpectedly, the former Prime Minister of Japan, Naoto Kan, appeared. Mr Kan happened to be at Parliament House that day and, being a big solar supporter decided to come and speak to us when he heard we were nearby. Speaking through an interpreter, Kan told us that he was Prime Minister when the massive Tōhoku earthquake and tsunami struck Japan in 2011. The Fukushima disaster that happened afterwards convinced him to steer Japan towards a solar future and he believed that both Japan and Australia shared a huge potential for embracing solar energy. 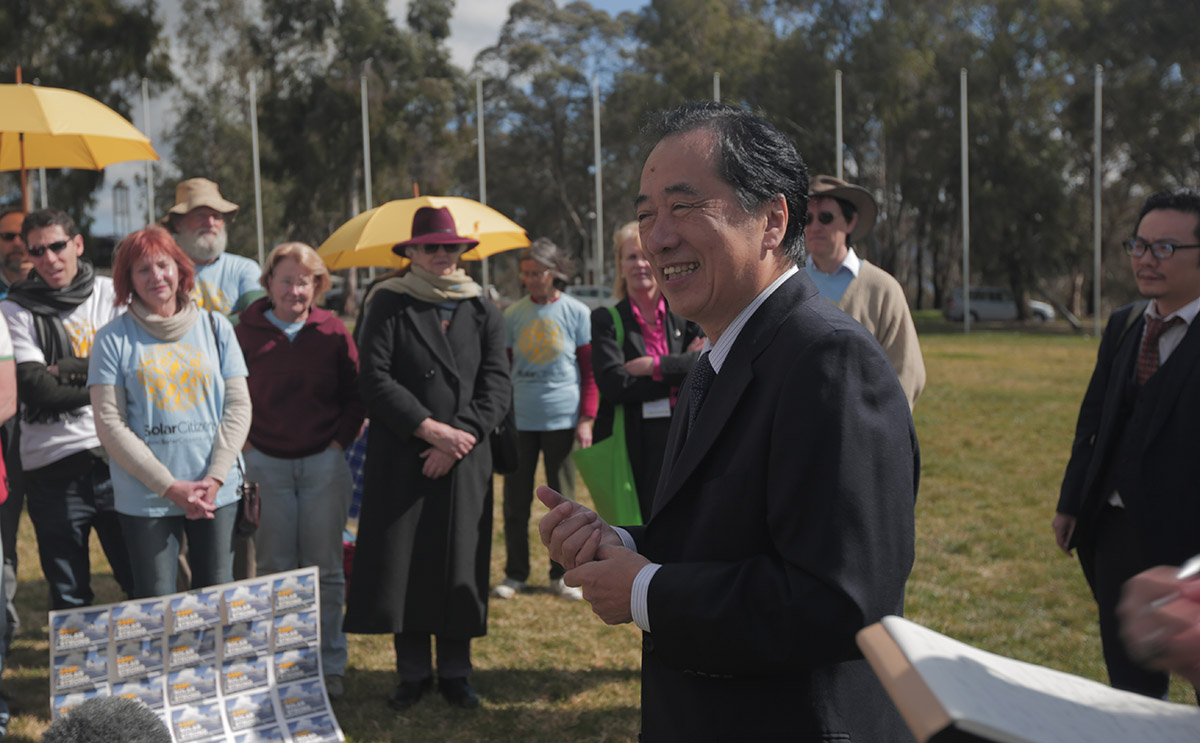 After a quick pack up on the lawns it was time to dash into Parliament House for the handover of the petition. Despite the bustle of activity in corridor after corridor, the courtyards that dot the inside of Parliament House are oases of tranquility. It was in one of these peaceful gardens that Solar Citizens volunteers Faith, Peter, Tom and Clara handed over the petition to Coalition MPs Sarah Henderson and Warren Entsch who accepted it on behalf of the government. 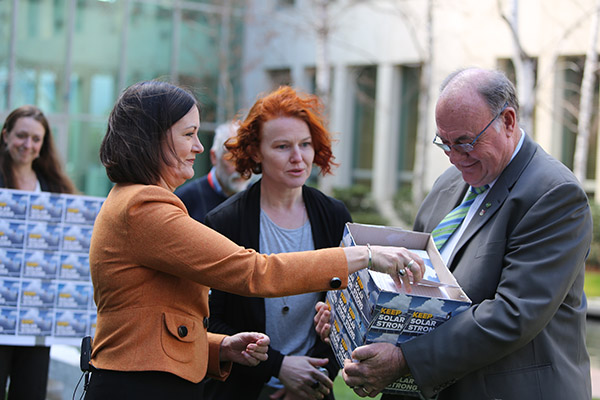 “Congratulations to Solar Citizens for your work in advocating support for solar and the Renewable Energy Target. I’m a strong supporter of the RET and I want it to continue as we need to give renewables security” Ms Henderson said. “It’s important to remember that after 2020 the RET will help drive down power prices.”

Mr Entsch is a big fan too, saying: “We’re really starting to appreciate what a fantastic resource we have in the solar and we need to support it. These 25,000 signatures are just a small indication of the massive amounts of community support for solar.”

But there was little time to rest and reflect. It was only just lunch time but we walked the halls of Parliament and met up with politicians and advisors to talk about our campaign to save the Target and the huge support for solar around the country.

It was a big, big day but one full of hope and excitement. From the beautiful solar display on the lawns of Parliament House to our meetings with Coalition and Labor MPs and the petition handover with Sarah Henderson and Warren Entsch, we have no doubt that our message to protect a strong solar future for Australia is getting through to the government, loud and clear.

And it’s all thanks to your hard work making this petition as big as it is. There’s more to do to make sure the Renewable Energy Target and solar is protected but we’re getting there!

Take a look at all the photos from the day in our Facebook album.