After the Independent Pricing and Regulatory Tribunal (IPART) proposed to cut the benchmark solar feed-in tariff (FiT) in NSW from 11.9-15c/kWh to 7.5c/kWh, the Sydney Solar Citizens group sprung into action to get solar owners a fair go.

With IPART considering slashing the solar feed-in tariff, it’s clear that solar owners and supporters aren’t being listened to. Solar owners are tired of doing the legwork and not seeing any gains. Why should solar households be punished for lowering wholesale power prices and reducing peak demand with their clean power? To make sure that our message was cutting across, we decided to make some noise outside of the NSW Parliament House.

Solar citizens turned out in front of Parliament House bright and early on Tuesday morning to say enough is enough: it’s time to lift the feed-in tariff, not reduce it! The Keep Solar FiT stunt involved performing an aerobics routine in bright, yellow sweatbands and tracksuits to the motivational beat ‘Walking on Sunshine’.

Choreographed by Kristy, the NSW Community Organiser, the dance movements and gym attire were definitely eye-catching. Pumping dumbbells and barbells emphasised how solar owners and supporters are doing the heavy lifting and reducing the cost of electricity for everyone.

To see everyone get involved in the theme of the stunt made getting up early in the cold morning totally worth it. The energy generated from all the volunteers was infectious and actually made you want to do a couple lunges and bicep curls. With all the flexing and ‘blue steel’ looks, solar power has never looked better.

Tamara Smith, the Greens Member for Ballina, and Adam Searle, the NSW Shadow Energy Minister, also came along. Even though they themselves didn’t wear tracksuits, they both demonstrated their support for a fair feed-in tariff. The Greens also took the opportunity to announce their intention to introduce a Private Member’s Bill to mandate a minimum fair price for solar.

With 12,107 signatures on our Fair Price for Solar petition, and the overwhelming benefits of solar power for energy savings, health and the environment, it’s time for the NSW Government to recognise solar owners for their heavy lifting and mandate a minimum fair price for power exported to the grid.

Want to know more about the action? Watch our video here. 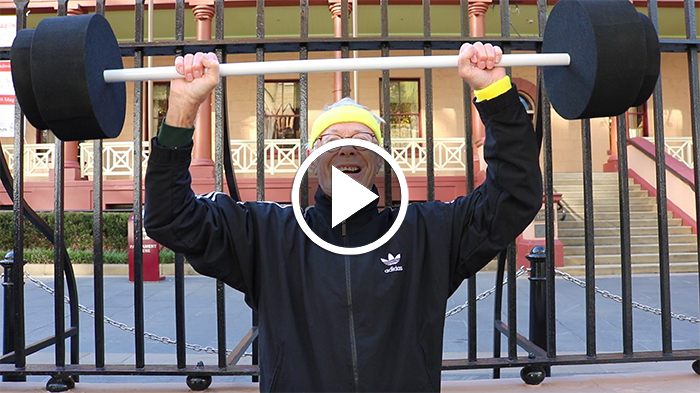