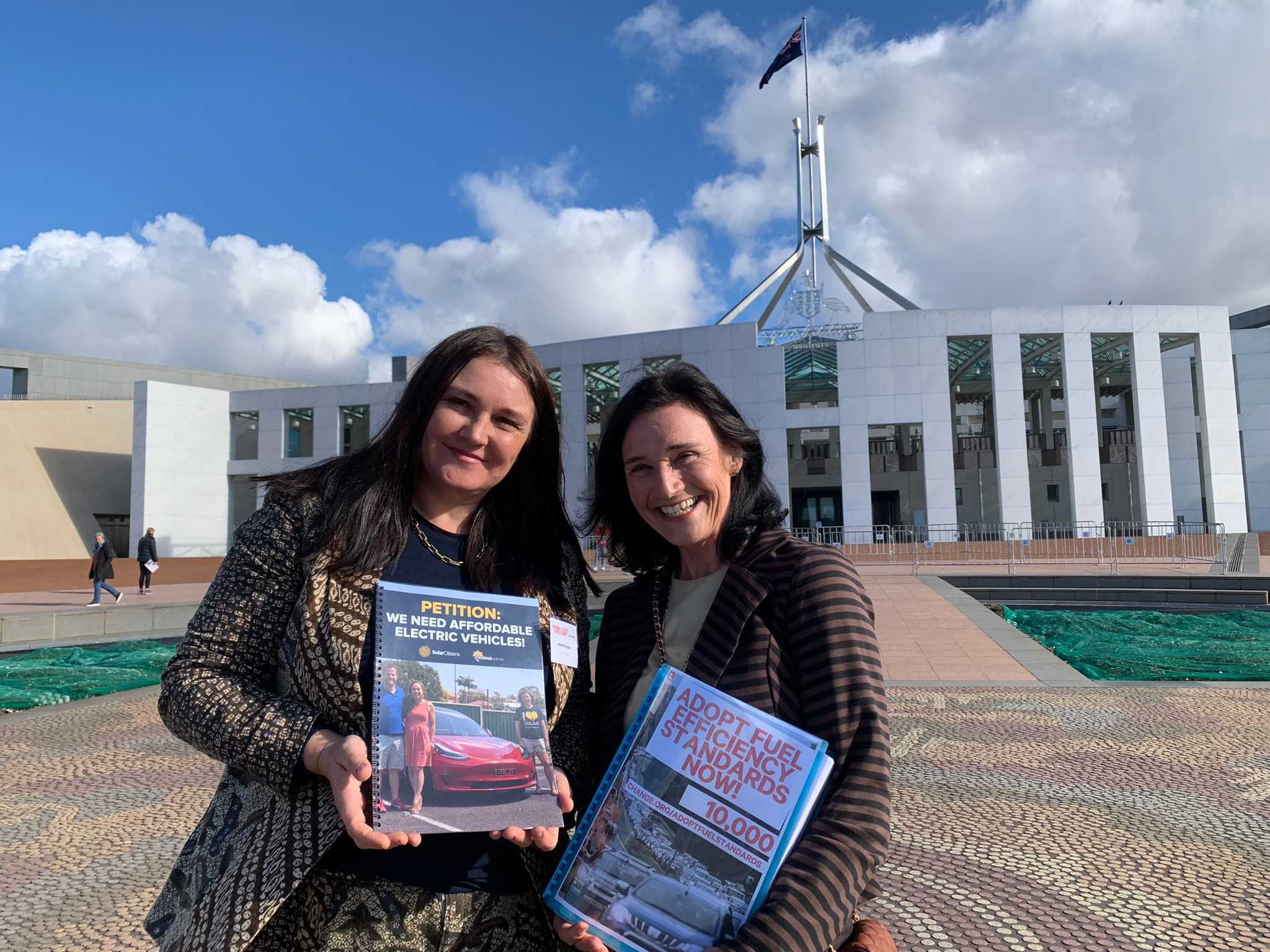 Deborah Thornton, from the small town of Copacabana on the Central Coast, is passionate about unlocking ways to get more affordable electric vehicles into Australia. After reading a story about how the lack of mandated Fuel Efficiency Standards was stopping Australians from getting access to affordable electric vehicles, Deborah told her friends “someone should start a petition about this”. She realised she had to walk the talk and started her own petition.

More than 8,000 signatures later, Deborah is on her way to Canberra tomorrow in time for a National Electric Vehicle summit, to deliver the first trench of signatures to Federal Energy Minister Chris Bowen’s office at a meeting organised by Solar Citizens.

But Deborah won’t stop here – she is aiming for more than 10,000 signatures, and is planning to meet with Minister Bowen himself to really drive home the message to him that everyday Australians need the Federal Government to help them receive the cost of living savings provided by electric vehicles.

“The petition has enabled me to have many conversations with community members about what Fuel Efficiency Standards are, and why we need them. Most people have never heard of them in Australia, or know that it’s the key policy mechanism needed for Australians to enjoy thousands of dollars a year in cost of living savings.”

Mandatory Fuel Efficiency Standards are used in most OECD countries to ensure car manufacturers are increasingly making low-emissions cars such as EVs available – by providing incentives and penalties, strengthening over time to increase the supply of electric vehicles and enabling countries to reduce their carbon emissions.

“At the moment that’s the problem – electric vehicles, even the small ones, are unaffordable. My daughter has my old Subaru Impreza, which is literally held together by masking tape, with 300,000 kilometres on the clock.”

Deborah told her daughter to keep the car running for a few more years, and wait for cheaper electric cars to start being available.

“I’m starting to lose hope. You have to get the first-hand electric car market going and only then you start getting a second-hand market. At the moment I can get more for selling my electric car than when I bought it because you just can’t get enough of them."

Electric vehicles are also much cheaper to run than petrol cars. From data we gathered from industry experts, we calculate that electric cars run off the grid for $3.50 per 100km, and when run from home solar can be as cheap as 32 cents per 100km, as opposed to prices up to $16 per 100 km for a comparable petrol car at today’s prices. So electric vehicles can be up to 98% cheaper than a petrol car of a similar make.

A few years ago Deborah invested in an electric vehicle herself. She has solar panels and a battery at home, and during summer she runs her car purely on sunshine. In winter, when the solar panels are shaded, she pays as little as $150 a month to run her whole house and car from the grid. 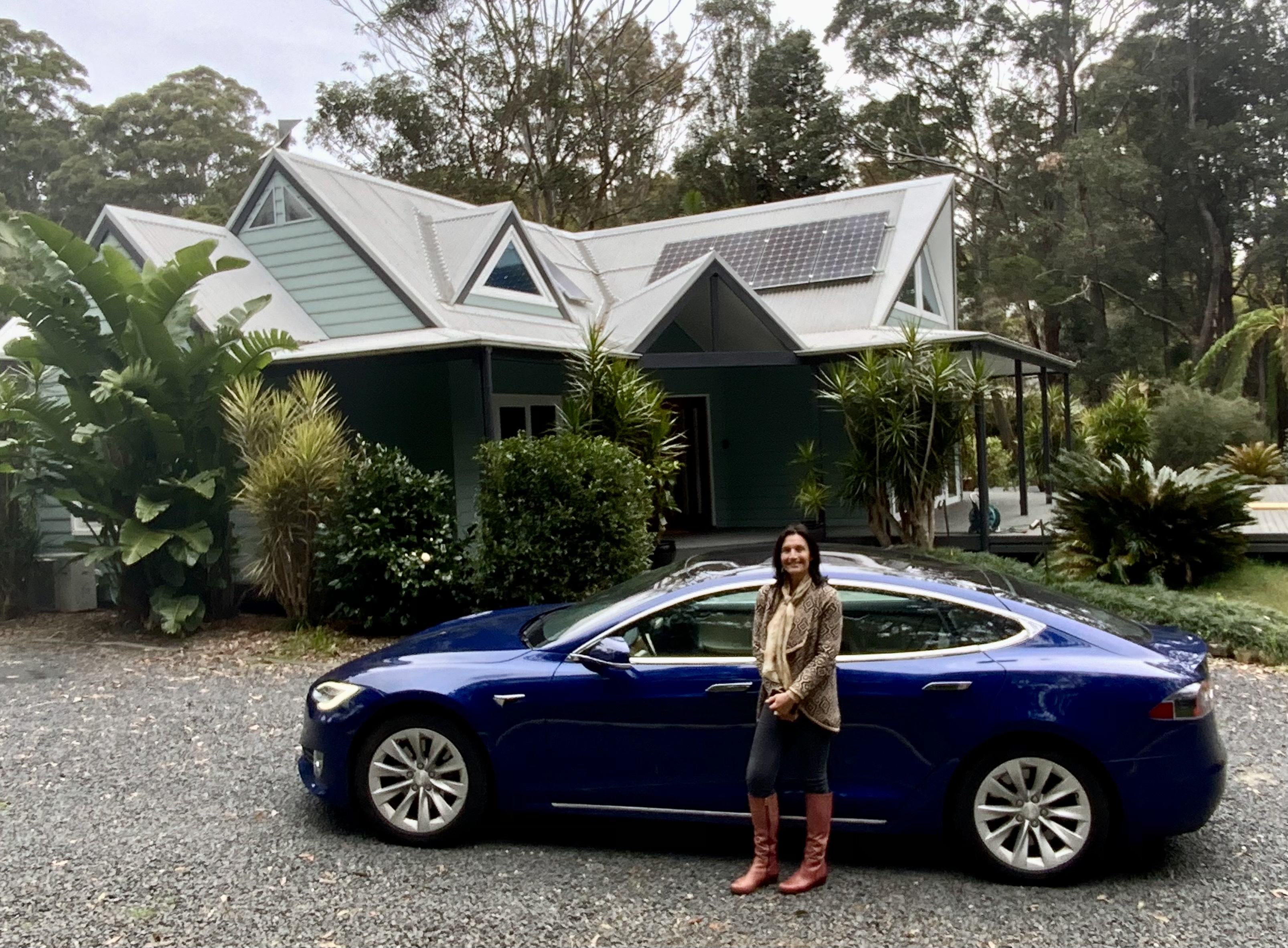 Deborah Thornton with her electric vehicle and rooftop solar array.

“What I would dearly love would be an electric ute. I would love to be able to replace our diesel ute with an electric one. Without fuel efficiency standards we won’t have a hope of importing any of the electric utes that are starting to become available overseas now.

“Electrifying transport and our home are better for our hip pocket, but also the single biggest factor to get us off fossil fuels. With gas and petrol, you don’t have a way forward. With electricity, there is a way forward. Hopefully, the faster we can transition to solar, wind, and hydro. There are so many different ways, and there are other things coming.

“We also need to electrify public transport and make it more accessible and easy to use because we can’t support everyone having a car.”

In her small suburban village near Avoca, Deborah says the public transport is “appalling”.

“Uber has not caught on here either. It would be wonderful if we had better public transport, and bikes lanes too – we don’t have them either which is a real shame. Imagine cities and towns with no traffic noise and, cleaner air – that’s a world I would like to live in.”

For more information about Fuel Efficiency Standards, check out our explainer here. You can also catch up on our webinar, The EV Revolution: Why Australia is Lagging Behind here.