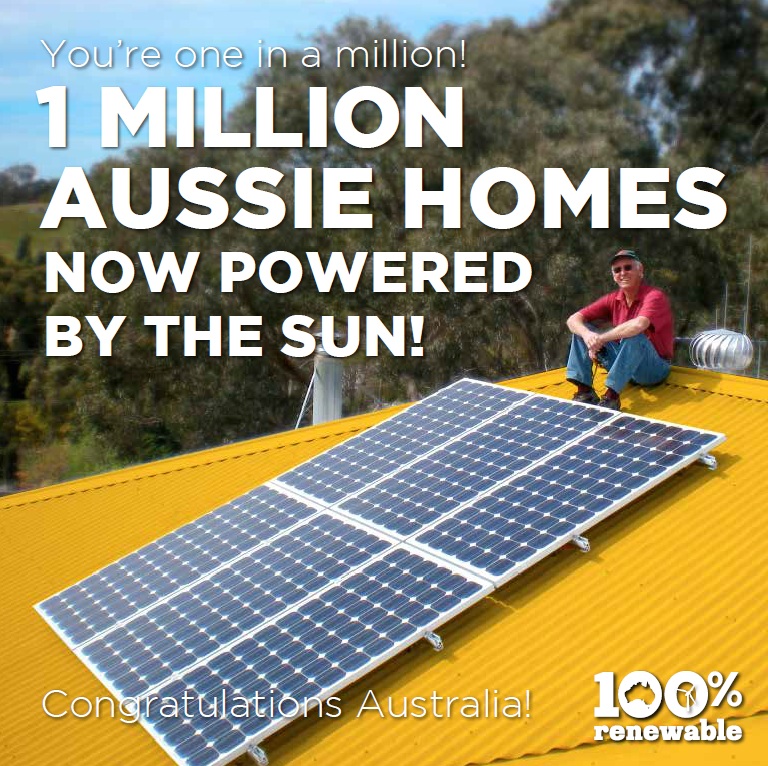 Collectively Australians have now invested $8 billion of their own money in rooftop solar panels, opting to get their electricity direct from the sun rather than rely on the polluting sources currently powering the national electricity grid.

The milestone was flagged by solar industry consultants Sunwiz as part of their regular analysis of government data on installations. Recent analysis has also shown that Australians from right across the political and income spectrum are embracing solar panels.

The amazing thing about this new million solar homes milestone is how fast it has been achieved. In 2006, the number of solar systems installed over the whole year was 900. In 2012 it had gone up to 300,000. The growth has been fuelled by the dropping price of household solar systems as the industry matures and is continuing in spite of diminishing policy incentives from state governments around the country.

Together with the households that have installed solar hot water systems, there are now well over 1.5 million Aussie households using the sun to charge up their household activities in some way. That’s a huge number of people realising the benefits of reduced power bills and clean renewable energy generation in their own homes.

But the benefits and implications extend beyond the household to the Australian economy and electricity network. Over 15,500 people now have jobs associated with the solar industry and the growing uptake of panels is contributing to reduced national electricity demand and helping the electricity network cope with periods of high demand on very hot days.

But despite all these benefits, the ability of Aussies to go solar is increasingly coming under threat. Some of the big energy companies are not interested in seeing Australians take back control of their power bills and have been lobbying governments to introduce measures that would slow the uptake of solar.

The wide range of tactics being employed by energy power players to try to slow the growth of PV and distributed energy include replacing net metering with gross metering (making solar generators feed their power into the grid and buy it back at a higher price!), retrospective feed-in tariff changes (i.e. cuts to the prices that people get paid for the power they feed to the grid), absolute caps on solar PV deployment and (meaning no new solar owners would be able to connect to the grid), high services charges and planning restrictions to try to increase red tape around solar connections.

The latest developments in Queensland where the the state pricing regulator has sanctioned the right of utilities to refuse solar PV connections is a recent example and live debate.

With all of this unfolding there is a real need for Australia's Solar Citizens - those of us who own or support solar power - to come together to make sure the interests of people who want to generate their own clean, renewable energy at home are protected from moves by the big power companies to protect their own profits.

We’ve known for a long time that Aussies are supportive of renewable energy but now we have millions of people living in solar homes and the number is growing.

We look forward to seeing many more exciting milestones reached as the power of harnessing energy from the sun really hits home for an increasing number of Australians.