This article was originally published in Renew Economy.

This is the first of a series of articles produced by the fair value for distributed generation project. In this article we explain the background to the project and the basis for our calculation that local rooftop solar is currently worth in the range of 10-18c/kWh when all the network, environmental and health benefits are taken into account.

Solar feed-in tariffs (FiTs) have had a controversial and complicated history in Australia. Many states started out with very high FiTs. Arguably some of the premium tariffs were allowed to continue for too long and should have been reduced gradually, but it is important to recognise that these policies did achieve significant benefits.

These schemes built a solar industry in Australia that delivers significant quantities of affordable, low-carbon energy into our grid. The renewable energy industry employs 14,000 people[1] and has led Australia to have by far the highest penetration of household rooftop solar in the world [2].

All the premium (i.e. paying more than the retail cost of electricity) schemes are now closed to new entrants, although some still have a number of years to run for existing eligible systems.

Setting of regulated minimum FiTs in Australia has always been a state responsibility. The current situation in the National Electricity Market (NEM) region is that regulated minimum tariffs are set in regional Queensland, Victoria and Tasmania.

There is no regulated FiT set in SA (as of 1 January 2017), NSW, ACT and SE Queensland, with governments and regulators arguing that in a competitive retail market, retailers will offer an attractive FiT to attract customers.

Regulatory bodies periodically review the methodology for determining FiTs and it was the combination of three forthcoming state reviews that prompted a consortium of organisations to seek and receive funding late in 2015 from Energy Consumers Australia to review and advocate on these methodology issues.

Submissions were made to state review processes in Queensland, Victoria and Tasmania, as well as to the review that led to the abandonment of regulated FiTs in South Australia. We also produced a range of advocacy materials that are currently being used in the Solar Citizens Fair Price for Solar campaign.

One of the headline findings of our project is that local rooftop solar is currently worth in the range of 10-18c/kWh when all the network, environmental and health benefits are taken into account as summarised in the following graphic. 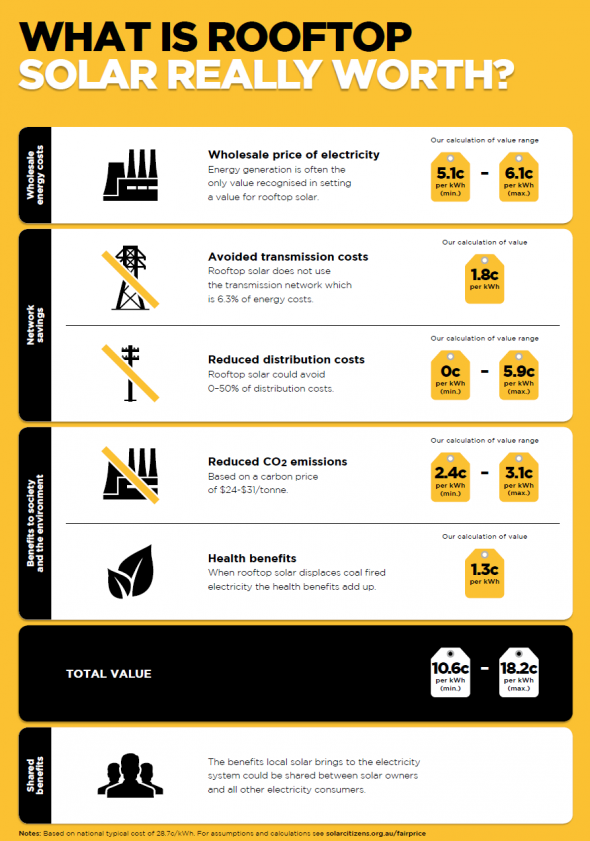 Regulators have traditionally used an average wholesale price for energy when calculating FITs. Arguably, solar exports are worth more than the average price because (except in Tasmania) they are fed in during times when wholesale energy prices are higher than average.

This is in line with the COAG agreed principle that FiTs should take into account “the time of day during which energy is exported.” In Victoria, from July 2017 the new solar FiT of 11.3c includes 8.1c for the wholesale price of electricity including a weighting to reflect the timing of solar export.

In addition to the avoided cost of purchasing wholesale electricity, solar pv can play a role in pushing down the wholesale price of electricity for all consumers through the ‘merit order effect’ which can be significant when demand and wholesale prices are high.

The range used in our estimate (5.1c-6.1c) is based on the national average price for 2014-2015 through to a 20% premium to cover time of day and merit order benefits. These figures are likely to be very conservative given recent and projected increases in wholesale electricity costs.

We argue that transmission charges should only apply to the electricity actually carried on the transmission network and that these savings should be treated as a benefit of distributed generation. In the next article in this series we deal with this issue in more detail.

Distributed generation can place less strain on the distribution network and thereby reduce costs in at least two ways. Firstly, energy from solar pv is typically used close to the point of export and therefore makes significantly less use of the ‘poles and wires.’ Secondly, a significant proportion of the cost of the distribution network is the transformers which convert higher voltages down to 230V. Solar inverters have this capability built in and export power at 230V. The value of solar pv in reducing costs for network operators is highly dependent on time and location, as well as the capacity and asset life cycle of local distribution infrastructure. Our maximum value saving assumes local solar avoids using the high voltage and subtransmission parts of the distribution network, which account for over 50% of costs.

Each kWh of solar pv that displaces coal-fired electricity avoids carbon pollution worth a minimum of 2.4c to 3.1c using current carbon pricing estimates. Carbon pricing consistent with the global objective of keeping global warming well below 2°C would translate to a much higher value.

Based on research by the Australian Academy of Technological Sciences and Engineering, each kWh of solar pv that displaces coal fired electricity contributes 1.3c in reduced health costs. This benefit is not currently reflected in any Australian FiTs but recent Victorian legislation makes provision for future FiTs to include a component based on the “avoided human health costs attributable to a reduction in air pollution”. In its determination of the 2017-2018 Victorian FiT, the Essential Services Commission concluded that “the necessary data to quantify those benefits with sufficient reliability to include them in a FiT are not available at present” so this is an important area for future research and advocacy.

We did not consider retailing costs in our assessment. These make up 29% of typical residential electricity bills nationally or about 8.3c/kWh. Under current regulatory arrangements it is not possible for consumers to avoid these costs except by going off-grid. New technology such as local storage and system such as peer-to-peer trading provide the potential for new models that could avoid or substantially reduce the retailing components of the electricity prices. However this would require significant regulatory change.

Distributed renewable energy generation, including solar pv, has many benefits on top of those considered in our methodology. These are real economic advantages even though they cannot be readily translated to a c/kWh value:

Direct jobs: Research by Ernst & Young for the Climate Council has shown that generating 50% of our electricity from renewables by 2030 would lead to over 28,000 new jobs and over 50% more employment than a business as usual scenario.

Industry development: Beyond the direct jobs in solar installation, building Australia’s capacity in emerging technologies such as battery storage and energy management will create the jobs of the future as the world moves to a decentralised and decarbonised energy system.

Energy security: An electricity system that is based on distributed local generation from a variety of renewable sources combined with local storage will not only reduce costs, it will make for a more robust and secure system that is less prone to failures caused by centralised infrastructure.

Energy literacy: Installation of solar pv gives homeowners a strong interest and motivation to better understand and manage their energy consumption. This will be an important driver of the uptake of new technologies such as local storage, demand management and integration of electric vehicle charging which can ultimately lead to a more flexible and economical electricity system.

In subsequent articles in this series we will look in more detail at the contribution of distributed generation in avoiding or reducing network costs, as well as discussing the difficulty in getting these benefits reflected in electricity pricing.

[1]  2015 figure from https://www.cleanenergycouncil.org.au/policy-advocacy/reports/clean-energy-australia-report.html Over half of these jobs are in rooftop solar.

[2]  Preliminary Report of the Independent Review Into The Future Security Of The National Electricity Market, p.13

Jack Gilding is the Executive Officer of the Tasmanian Renewable Energy Alliance and was the project manager for the project “Research review and advocacy on the fair value of distributed generation”.