The Australian Energy Market Commission (AEMC) is proposing to change the rules that govern our energy system in a move that would see solar households charged for exporting their clean power to the grid.

There are several concerning aspects to the AEMC’s Draft Rule Determination. In this blog we explore why Solar Citizens does not support charging solar homes and businesses for exporting excess solar energy.

The Australian Energy Market Commission has put forward this rule change because they claim that there are “traffic jams” in the electricity network. They suggest that at times there is too much solar energy and this is causing problems in the ‘pole and wires’ and driving up voltage in the grid. To fix this issue they want network companies to have the ability to charge solar homes and businesses, allowing them to spend more on upgrading the grid for solar.

As straightforward as this might sound, there is actually very little evidence that solar is:

A study completed for the Energy Security Board by the University of NSW found that there is a significant level of high voltage across networks even at night when rooftop solar is not operating. If high voltages are present in many locations at all times of the day then it indicates that network companies are failing to properly maintain grid voltage. So why should solar homes be slugged when they’re not causing the issue?

Now, it is true that high levels of rooftop solar can cause issues in the grid. We see this in South Australia where low levels of demand are resulting in new safeguards and systems coming into place. However, the smart inverters that are now being rolled out across South Australia to help resolve these issues come with a relatively small cost to consumers. So what exactly would solar homes and businesses be paying for?

Another reason the AEMC justifies putting forward this rule change proposal is to build a fairer energy system so that non-solar households don’t have to pay extra for grid upgrades that support solar. This is a noble goal, however analysis from the Victoria Energy Policy Centre found that solar households provide a net benefit to all electricity consumers by pushing down wholesale electricity prices. In fact, the latest data from AEMO shows regional spot electricity prices reduced by up to 68% in the first quarter of 2021 compared to the same period in 2020 due in part to Australia’s impressive uptake of rooftop solar. It seems inequitable to charge solar owners for bringing down electricity bills for everyone.

One thing that we do agree with the AEMC about is the worrying growth of solar customers that are being denied the right by networks to export any clean energy to the grid. As it stands, network companies don’t have to provide export services to customers and they don’t have to justify why some consumers aren’t allowed to put any of their solar energy into the grid. Networks should be providing export services and there absolutely needs to be more transparency around when and why export  limits are being imposed. We fear that in many cases solar households are arbitrarily being denied the right to export clean and affordable electricity when they can easily be accommodated.

Millions of Australians now have rooftop solar installed on their homes or businesses. These Australians made an investment in good faith and often with incentives from both state and federal governments. It would be unfair to retrospectively change the rules and undermine the financial case for their investment. 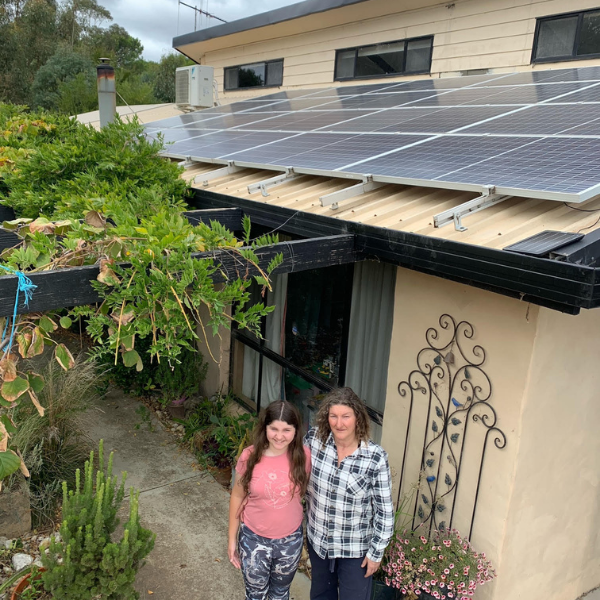 This decision will affect people like Jodi, a self-employed single mother who installed solar on her Bendigo home.

“I’m on a low-income, below the poverty line, and I still managed to get solar. It’s very cost-effective over the long-term in saving money,” said Jodi.

“I found with Covid that work just evaporated. Apart from job-keeper, I didn’t have normal income from business, so not having to pay an electricity bill helped ease the stress.

Solar owners have also raised concerns about the loans they took out to install solar panels, questioning how they will make repayments if this rule change undermines their financial planning.

Analysis by Professor Bruce Mountain from the Victoria Energy Policy Centre estimated, based on examples given in the Draft Determination, that the charge suggested by the AEMC could fall between 4c/kWh and 4.9 c/kWh – if networks used this as a guide when setting their charges, the effect on solar households would be much greater than stated.

Perhaps one of the silliest aspects of this rule change proposal is there’s no assurance that retailers will pass on the extra network costs as is intended by the AEMC. It’s electricity retailers, not network companies, that bill consumers but in the draft rule change there are no requirements for how these extra charges are to be passed on. For example, in South East Queensland the network provider Energex already charges solar homes more for their service, but many retailers operating in SEQ pass on these charges evenly to all consumers. In the rule change draft there is very little information about how this proposal will work in practice and it raises questions about it’s viability.

In addition to this, there’s evidence that small-scale solar uptake has slowed since AEMC’s draft determination was released and this rule change could drastically discourage Australians from installing solar PV. The growth of rooftop solar is vital for further reducing emissions in Australia’s electricity sector and any slow down will hurt Australia’s efforts at curbing the worst impacts of climate change.

It’s imperative that there’s greater transparency around the prevalence of high voltages across networks, and evidence to support the claim that this issue cannot be remediated by low-cost methods. If we expect a growing uptake of household and community battery storage as well as electric vehicles over the next five years, it’s also likely that this issue might not be as widespread as anticipated by the AEMC.

Given this, we support the following:

If indeed consumers face growing limitations to the net amount of energy they can export, despite the uptake of flexible export limits, storage and electric vehicles, then we believe that state and federal governments are best placed to coordinate solutions.

These solutions should include incentives for households storage and electric vehicles, as well as programs to assist more low-income, rental and social housing residents to access affordable solar energy.

As more coal-fired power stations reach the end of their lives, it’s also important for state and federal governments to invest in other forms of storage, such as pumped hydro, community-scale batteries and renewable hydrogen, all of which will play a role in soaking up excess solar energy in the middle of the day.

Abundant solar energy is a vital ingredient for a reliable and affordable energy system as the grid transitions at a rapid pace. We believe this rule change will slow the uptake of small-scale solar and unfairly penalise millions of Australian energy consumers

For a more in depth discussion of these arguments regarding the proposals to remove or edit 6.1.4 of the National Electricity Rules you can view Solar Citizen’s second submission to the AEMC here.