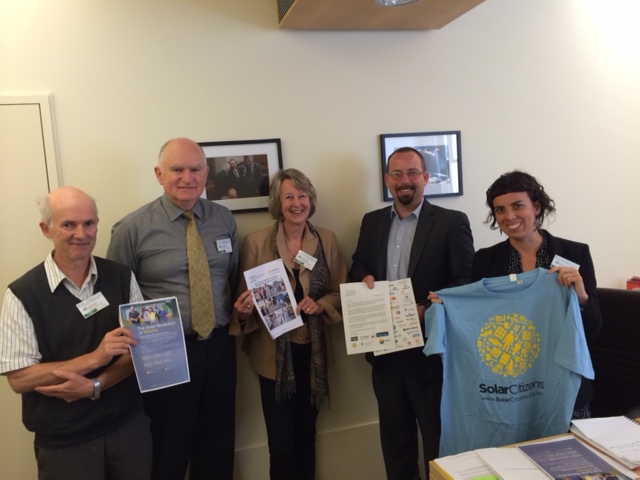 Solar Citizens supporters met with Senator Muir in Melbourne on Wednesday to discuss the future of the Target, deliver a Solar Briefer report and a letter from the Solar Industry signed by 470 solar businesses across Australia.

Solar Citizen’s Community Organiser Taegen Edwards said “We are pleased to see that Senator Ricky Muir is clearly in touch with what Australians want, which is the full 41,000 gigawatt hour Renewable Energy Target.”

“The Renewable Energy Target creates opportunities for Australian industry and also helps families to manage their cost of living by installing rooftop solar, which is why I am pleased to support the full 41,000 gigawatt hour Target.”

A recent survey polling people in Melbourne and Gippsland found that a large majority of people wanted the RET to stay the same or be increased.

“Ninety per cent of people surveyed wanted the RET to stay the same or to be increased and 91% of people said they wanted Senator Muir to protect the RET,” said Ms Edwards.

“If the Target is reduced or abolished, millions of Australians will be prevented from going solar and saving money on their electricity bills. Australians want more solar, not less.”

“Australians are relying on politicians like Senator Muir to save the RET from attack from a Federal Government that puts the needs of the big energy companies over those of everyday Australians,” said Ms Edwards.