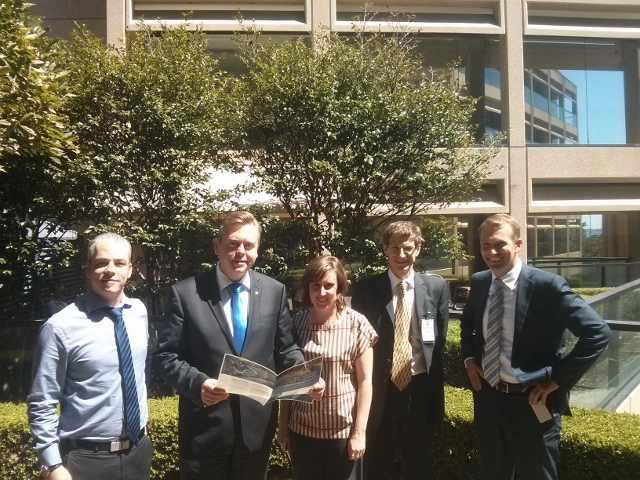 Above: The Solar Citizens team with Minister Roberts and Stokes.

This was one meeting in a series we have lined up with state energy ministers to handover the "Don't Tax the Sun" petition and get commitments not to slug solar homes with extra fees or charges.

At the meeting we presented our 27,200+ strong Suntax petition and asked some big questions. We asked for their commitment to impose no fixed fees or penalties on solar owners, and whether they support keeping the Renewable Energy Target strong.

Mr Roberts told us his father had solar on his roof and Mr Stokes reiterated the arguments that he’d made in a recent article in the Sydney Morning Herald.*

They told us: "We will not be introducing additional fees or charges that single out solar homes in NSW."

While this was encouraging, less encouraging was a lack of willingness to support the Renewable Energy Target, stating they were “waiting to see the outcome of the federal review” and continued unwillingness to address the great retailer rip off for NSW solar owners on no guaranteed feed-in tariff.  There’s clearly more work to do.

Of course, we know that governments have the ability to go back on their word so we will all need to stay alert.  But both Minister Roberts and Mr Stokes are now more aware of the tens of thousands of voices that are standing strong on solar - and that Solar Citizens across NSW will be keeping an eye on them and will be ready to fight back.