UPDATE: Under pressure from WA Solar Citizens, the Barnett Government has now backflipped on plans to increase prices for solar owners but is looking to allow power companies to set higher prices instead. Click here to read more.

Pictured: Perth Solar Citizens handed over our 3,200 strong petition to Energy Minister Mike Nahan on 11th May 2015, the day before the budget, along with a letter calling on Nahan and the Barnett Government to go much further to grow and protect solar in WA. 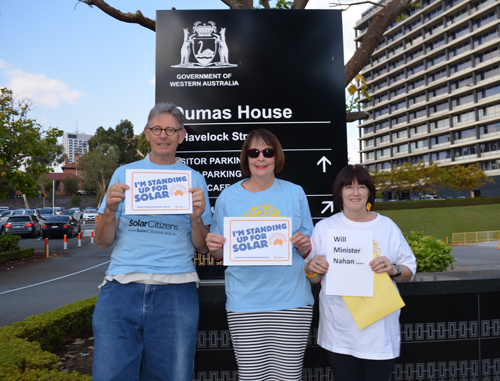 BREAKING: WA Treasurer Mike Nahan has signalled plans for unfair attacks on solar homes in the May Budget.

This is nothing but a discriminatory attack on solar households and a huge step backwards for the growth of solar power in Western Australia.

175,000 West Australian families have made the responsible decision to take control of their energy bills by generating clean power from the sun. They should not be penalised just for going solar.

Show Treasurer Nahan and the Barnett Government that solar households won’t be discriminated against.

Sign the petition below to tell Treasurer Mike Nahan and the Barnett Government not to slug solar homes with higher fees.

We, the undersigned, are deeply concerned by your proposed plans to increase fixed charges, discriminating against solar households.

Treasurer Nahan has unfairly blamed solar households for rising energy prices. He needs to rule out any plans to slug them more for network charges.

Governments who genuinely care about rising power prices should congratulate consumers who install solar power, not wage unfair attacks on families who are taking active steps to manage their household budget.

We call on you to drop any plans to punish hard working families for doing the right thing, and guarantee no unfair fees and charges will be introduced for solar homes in WA.