Fair price for solar: get the facts - Solar Citizens

Fair price for solar: get the facts

Click here to join the campaign for A Fair Price for Solar.

Why is solar power undervalued in Australia?

Solar PV owners typically receive around 11c/kWh for their surplus electricity that goes back into the grid. This is then on-sold to neighbours—sometimes travelling only a few metres down the poles and wires—for 32c on average. 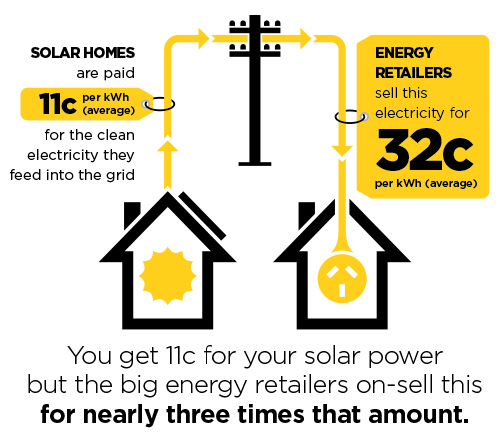 Why is there such a big difference?

The price of rooftop solar is determined by state-based regulators who have a very narrow view of what solar electricity is worth, based mainly on the average wholesale value of electricity. The rules that determine electricity prices are based on an old, centralised model of electricity flowing one way from large coal-fired generators to passive consumers. But with 1.7 million homes and businesses now equipped with solar generators on their rooftops and battery storage about to take off, the future of “distributed energy” is now.

Our research suggests exported solar power is worth 16-21c/kWh when all the network, environmental and health benefits are taken into account.

Your electricity bill is made up of costs allocated to different parts of the electricity supply system even though you won't see these items on your bill.

Please note: the figures below are slightly out of date since the July 2017 increase, we are working on updating them.

The electricity generation costs are around 5c to 6c which is similar to the price set for exported solar. But solar electricity is often produced at times when electricity is most expensive—such as on hot afternoons when air-conditioners increase demand on the electricity network. The current price for rooftop solar paid by retailers doesn’t recognise this.

Then there are the costs for the transmission infrastructure, (the large, ‘coathanger’ high voltage lines) and distribution (the poles and wires along your street). Rooftop solar doesn’t actually travel along transmission lines at all. And it uses far less of the distribution infrastructure. So electricity from rooftop solar shouldn’t be charged transmission costs and should pay less for use of the distribution network. What’s more, around 8% of the electricity that travels from large coal and gas fired plants to homes get lost along the way, whereas “distributed” rooftop solar experiences a tiny fraction of these losses.

On top of this, solar is much healthier, cleaner and safer than other forms of grid energy like coal, gas or diesel.

The rules that govern electricity prices were designed to finance the investments of the past, not to build the energy system of the future. But the electricity sector is changing and our rules need to change with it.

A crucial part of this reform is to make sure that the millions of Australians who have invested in solar power get a fair price for the clean energy they feed into the grid.

Because rooftop solar has no fuel costs, doesn’t waste energy travelling hundreds of kilometres and doesn’t require a large expensive grid it’s actually a much cheaper way to generate and trade electricity.

A fair price for solar will help create a cheaper, healthier and more robust electricity system that will benefit all consumers, whether they are solar owners or not.

What is your rooftop solar really worth?

Energy generation is often the only value recognised in setting a value for rooftop solar.

Rooftop solar does not use the transmission network which is 6.3% of energy costs.

Our calculation of value: 1.8c/kWh

Benefits to society and the environment

Our calculation of value: 1.3c/kWh

The benefits local solar brings to the electricity system could be shared between solar owners and all other electricity consumers.

Note: Based on national typical cost of 28.7c/kWh. For assumptions and calculations see solarcitizens.org.au/fairprice

An explanation of the benefits of rooftop solar

Regulators generally use an average wholesale price for energy when calculating solar feed-in tariffs (FITs). Arguably, solar exports are worth more than the average price because (except in Tasmania) they are fed in during times when wholesale energy prices are higher than average. This is in line with the nationally agreed principle that FiTs should take into account “the time of day during which energy is exported.”

In Victoria, from July 2017 the solar FiT will vary based on the time of day in three bands (peak/shoulder/off-peak), as well as an additional ‘critical peak’ payment at times of very high wholesale prices.

In addition to the avoided cost of purchasing wholesale electricity, solar PV can play a role in pushing down the wholesale price of electricity for all consumers. This is called the ‘merit order effect’ and it can be significant when demand and wholesale prices are high.

Distributed generation can place less strain on the distribution network and thereby reduce costs in at least two ways. Firstly, exported energy from solar PV is typically used close to the point of export and therefore makes significantly less use of the ‘poles and wires.’ Secondly, a significant proportion of the cost of the distribution network is the transformers which convert higher voltages down to 230V. Solar inverters have this capability built in and export power at 230V. The value of solar PV in reducing costs for network operators is highly dependent on time and location, as well as the capacity and asset life cycle of local distribution infrastructure. Our maximum value saving assumes local solar avoids using the high voltage and subtransmission parts of the distribution network, which account for over 50% of costs.

Each kWh of solar PV that displaces coal-fired electricity avoids carbon pollution worth a minimum of 2.4c to 3.1c using current carbon pricing estimates. Carbon pricing that met the global objective of keeping global warming well below 2°C would translate to a much higher value.

Based on research by the Australian Academy of Technological Sciences and Engineering, each kWh of solar PV that displaces coal fired electricity contributes 1.3c in reduced health costs.

But wait…there are even more benefits!

Distributed renewable energy generation, including solar PV, has many benefits on top of those outlined above. These are real economic advantages even though they cannot be readily translated to a c/kWh value:

All consumers will benefit from a move to local energy production

All consumers should benefit from moving to a modern electricity system which is cleaner and more robust. Prices will be reduced for all consumers because there will be less need for expensive networks and renewable energy has no fuel costs.

Policies and innovative new arrangements such as local energy trading are necessary to ensure the benefits are shared fairly.
Sharing distribution cost savings with other consumers is one suggested way of doing this.

Holding back new technologies and relying on existing centralised networks and coal and gas generators will not benefit consumers who are struggling with the cost of living.

Solar owners have already invested over $8 billion of their own money to build Australia’s renewable energy capacity.

What needs to change?

Click here to join the campaign for A Fair Price for Solar.