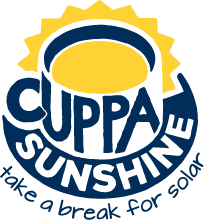 Thousands of community members will gather across Australia this week to send a message to key senators and the government that they need to stand up to the big power companies and secure the future of the Renewable Energy Target.

Research shows 73 per cent of Australians support keeping the Target at its current level or making it stronger.
To demonstrate the strong community support for the Target people will come together at more than 200 Cuppa Sunshine events this week.

Lindsay Soutar, National Director of community-based consumer group Solar Citizens, said the inaugural national event was a significant opportunity for solar rooftop owners to share their stories of how they had taken control of their power bills and generate their own energy.

“Communities from Rockhampton to East Melbourne are coming together to show the Government and Senate crossbench that they should stand with the community who want to keep the Renewable Energy Target and solar strong,” Ms Soutar said.

“This week, thousands of people will gather all around Australia in workplaces, cafes, and living rooms to put pen to paper and show our Government and crossbench senators just how deeply Australians care about a strong solar future.
“More than 5 million Australians live under a solar roof and many more families want to make the move to solar. Solar helps people take control of their power bills, plain and simple.
“Any changes to the Renewable Energy Target will make it harder for Australian families to go solar.

“There’s no question that the future of solar in Australia hangs in the balance – the Federal Government is showing once again how out of touch it is with the Australian people, as it positions to break another election promise.

“The Government appears intent on trying to axe or gut the Target, a successful government policy that acres of modelling and research has found will reduce power prices for all consumers in the long run.

“The Government is placing the wishes of big energy companies ahead of ordinary people who are trying to make ends meet.

“The cross bench senators have shown they are willing to stand up for everyday people by protecting the Renewable Energy Target. Now the government needs to do the same” Ms Soutar said.

Australians are locked out of EVs by price and availability